The Cloak Ability gives the user invisibility for 4 seconds. During this period, you will be invisible to computer AI, meaning that computer AI will not fire intentionally at you. However, if you use a weapon or capture a flag while you are still invisible, your cloak will wear off instantly. You can use the cloak ability to sneak into enemy fire and get the flag or kill someone. Also, it would help if you cloak with no one around. Someone will notice if you disappear all of a sudden. To human eyes, cloaking can be seen faintly. However, to trained individuals, invisible enemies are as bright as day and 'What Was That?' kills are pretty easy to achieve for them. The only thing stopping a player from getting a "What Was That" kill bonus is its short duration.It is pretty easy to get in human campaign as most of the aliens have cloaking.

This ability is generally used to get past heavy defence in Capture the Flag, and/or to sneak behind someone to get a clear view of him. Shoot someone at point blank range with an explosive device for Direct Hit and Butt kill/Assasin while in this. This ability is basically a "delayed" teleporter that allows you to "manually" go to your destination before attacking/being attacked again. However, if you're not careful, and you run into a battle zone, the enemy will still shoot at "you" even though you're invisible, because they're shooting at your allies, but since you got into the path, you're the target. 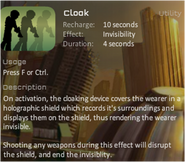