The Raze Soldier is the only survivor in the now extinct Raze Task Force, with the achievement of single-handedly stopping the Alien Fleet with his top-notch battle skills (as said by the Alien Commander). He is an introvert, being silent all the time, and has never been seen talking before in Raze 2. However, he had a military personality in Raze 1. The reason for this is his shock of killing his original team and being put in cryostasis for nine years.

He was also an elite soldier and has great expertise and uncanny skill sets. He is first playable in Raze 1, in which he is you, the main playable character--the protagonist of the Human Campaign, also the antagonist of theAlien Campaign. He is a inexperienced chap at first, but later became the only task force member left due to the slaughtering of his teammates-turned-zombies on the transport ship in Raze 1. He later gets infected with the zombie virus too, but was able to be put into cryostatis until Raze 2 as he was pulled out in 2117. He is praised by the instructors and the new recruits as, "impressive" due to his excellent skills in Juggernaught. He is also a silent fighter, unlike everyone around him, who chats. Surprisingly, his memory doesn't get wiped out instantly and continues fighting for the humans, unlike many, like Sgt. Johnson and the rest of the team in Raze 1. Supposedly, he still has some time before the virus takes over--although the outside effects have already been mutated.

Captain Biggs is the pilot of the military ship Echo-1 and a soldier of the Raze Task Force. He is very loyal to the humans and also patriotic to Earth, hence his urgency to warn the people of Earth. He uses weapons that are good at getting critical kills.

The zombies are a subspecies of humans who are currently infected with the zombie virus that was brought by the Alien Fleet. Zombies are technically human beings, but a certain mutating agent inside the virus mutated human beings so they have no brains, rotting flesh and bloody clothes. Due to their (lack of) intelligence, they are suicidal and stupid, blowing themselves up with Rocket Launchers. Also, they cannot sense much pain, so they are extremely durable (200% HP), with only the Raze Soldier Zombie outrivaling them (500% HP). They use basic, standard-issue weaponry, with the exeption of the Vamp Charger, which, alongside the Rocket Launcher, are prominent weapons in their armory when killing... themselves...

Alien
The intellectual level of these
creatures are...embarrassing... to say
the least.

J. Rockit is one of the highest ranking human soldiers and a close-quarter combat expert. Having mastered the art of Close Combat, he wields a Katana that he swings when enemies get near. He is extremely powerful in a fight, and wields Adrenaline Boost, which makes him harder to kill.

Something to note: His name was originated from a popular game called, "Johnny Rocketfingers" as well as a restaurant known as, "Johnny Rocket's" The creators described him as, "A mix of Rambo and Solid Snake"

Md. Sage is a highly trained field medic, being able to heal himself and allies with his Emergency Heal ability. His skills as a soldier are rather good, and tends to choose weapons which have close links to ice. He tries to be polite, even during battle.

"I'm Treem, the explosives speciallist. Best stay far from me unless you want to get burned."

Ex. Treem is a soldier who uses explosives and fire weapons. He burns everything in sight, including allies. Due to his expertise in handling explosives, he uses Grenades and Ion Cannons to attack. Also, he has received training in fire weaponry, so he mainly uses fire weaponry to kill. Of evey team member, he is the least predictable. 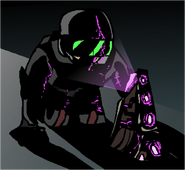