The Katana is a melee weapon that can be used at close range. It is normally wielded by close combat experts. When used, the katana is an all-purpose weapon. It can be used to wound the enemy by 50% damage, or be used to deflect shots if used at the correct timing. This weapon is extremely useful, but takes time to master. This weapon is a favorite of Johnny Rockit, due to his occupation as a close range expert.

The Katana deals 50% damage to enemies. Reflected bullets do the same damage as they originally do. All reflected bullets as well as the slash itself is modified by the Double Damage powerup. All kills by reflected projectiles give a player the Reflection kill-bonus.

The Katana can be reflected by other Katanas or the Static Field.

The Katana can also flick off grenades that are stuck on the body of the user or "Defuse and reactivate" a land mine.

The origin of the Katana idea comes from Star Wars. The Jedi uses lightsabres which can attack, and deflect the blasters when swung at the correct time, like the Katana of Raze 2. Usually because of the sharpened senses that the Force gives them, they are more likely to deflect projectiles and can do it at a much faster rate than the katana of Raze 2. However, if the jedi are outnumbered by droids 20 to 1 surrounded at close range, then they might die.

The katana is generally defined as the standard size moderately curved Japanese sword with a blade length greater than 60 cm (23.6 inches). Strictly speaking, katana in Japanese is applied to any kind of single-edged sword, of any origin. It does not necessarily refer to a Japanese sword.

The Katana in action 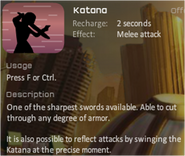