The Land Mine ability allows a user to plant several land mines around a map. These land mines will remain dormant until an enemy triggers its pressure activaion trap, or they deactivate themselves from lack of enemies. These land mines have the technology to distinguish between ally and enemy, so they will never trigger if an ally steps on them. If an enemy steps on them, the land mine will detonate, damaging the enemy severely by 50% HP and will also damage nearby enemies. Land mines that are on your side blink green while land mines on your enemies' side blink red.

Best used in Capture the Flag to defend your own flag, or place it at "hard to avoid" spots, a spot where you can't avoid if you want to run/jump into that path or near power-ups and other pickups.

If a reprogrammed land mine kill a player not touching the mine, "Splish Splash!" kill bonus is awarded even if the mine is an explosive weapon.

A land mine is an explosive device, concealed under or on the ground and designed to destroy or disable enemy targets as they pass over or near the device. Such devices are typically detonated automatically by way of pressure from the target stepping or driving on it, though other detonation mechanisms may be possible.[1] The device may cause damage either by a direct blast or by fragments that are thrown by the blast.

The name originates from the ancient practice of military mining, where tunnels were dug under enemy fortifications or troop formations by sappers. These killing tunnels ("mines") were at first collapsed to destroy targets located above, but they were later filled with explosives and detonated in order to cause greater devastation.

Nowadays, in common parlance, land mines generally refer to devices specifically manufactured as anti-personnel or anti-vehicle weapons. Though many types of improvised explosive devices("IEDs") can technically be classified as land mines, the termland mine is typically reserved for manufactured devices designed to be used by recognized military services, whereas IED is used for makeshift devices assembled by paramilitary or terrorist groups.

The use of land mines is controversial because of their potential as indiscriminate weapons. They can remain dangerous many years after a conflict has ended, harming the economy and citizens of many developing nations. With pressure from a number of campaign groups organised through the International Campaign to Ban Landmines, a global movement to prohibit their use led to the 1997 Convention on the Prohibition of the Use, Stockpiling, Production and Transfer of Anti-Personnel Mines and on their Destruction. As of 2011, a total of 158 nations have signed the Ottawa treaty.

Obviously someone forgot to tell the head of Raze that it was illegal. Then again, it could be because of the self destruct timer built in. 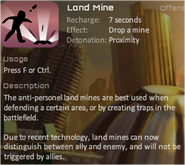 Land Mine in action.
Add a photo to this gallery
Retrieved from "https://razetwo.fandom.com/wiki/Land_Mine?oldid=10934"
Community content is available under CC-BY-SA unless otherwise noted.