(The alternative level of the final level of the human campaign) The final battle has come. You and two other commanders face off against a whole team of humans and the legendary Raze Soldier, now mutated into a zombie. Will you kill off the humans before the meteors kill off the planet?

Go for the Powerups as much as possible. A bad habit of many players in the Dome is they tend to roam around the bottom.

Raze Soldier is most likely to spawn in the center of the terrain, but found at the bottom.

This is an useful path to take for spotting Raze Soldier. From you current position, go to Rapid-fire, run left to Invincibility and run right. Swing your mouse for better view and you should pretty much have a good look at the whole map.

As a last ditch effort, run right up to Raze Soldier, make him shoot his rocket, and kill both of you or at least make him take damage.

Commander
This is it, fellow Commanders.

Commander
The meteors are heading our
way... We only have 4 minutes.

Commander
The one known as 'Raze'... He
seems to have mutated into a
powerful form.

Commander
Kill the others first, I want him
all to myself.

Commander
Time is up comrads, we are all
doomed...

If you run out of time, this is what you'll say... 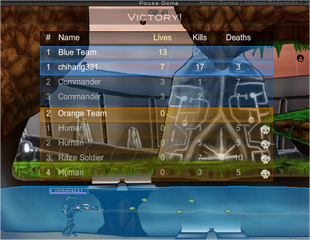 This might be the current record holder for recorded finishing time on the Raze 2 wiki contributors.
Add a photo to this gallery

1 of 5
Add photo
Retrieved from "https://razetwo.fandom.com/wiki/Level_15_Alien_campaign:_A_Soldier%27s_Demise?oldid=11662"
Community content is available under CC-BY-SA unless otherwise noted.