Start a Wiki
Depending on how good you are at pulling off headshots in the middle of a massive firefight, the magnum could very well mean victory or death. In the hands of an experienced user, the magnum is practically a long range shotgun -able to wipe out shields and even kill unshielded targets in a single shot. For those who are not too accurate with controls, watch out. Missing too often with this short clipped gun will often leave you open while reloading and also wastes precious ammo.

The Magnum is a sidearm with the heaviest amount of damage for a sidearm. Because of its high damage, high accuracy and special ability, it is suited for both close combat and long range shooting. The Magnum does critical damage to the head so when you are fighting an opponent, whip out the Magnum and aim for the head. It is also useful to finish the last level on the alien campaign. It is also great for sniping. This is also good for chases. Has a fairly high DPS. Deals around 60-80 damage for headshots. One clip can definitely finish off 1 enemy.

Based on the Magnum T2, but as a Revolver, the starting weapon in Raze 1. Considerably stronger than its weak predecessor. But it lacks the clip size that the Magnum T-2 had. It's fires a little bit slower than the Magnum T-2. and can store way less clips.

-Most Powerful of all sidearms.

-Good choice when diving on enemy from above.

-Headshot not scored too often

-Need two hits to the head to finish enemy off.

-Has a tiny clip and not much clips can be stored.

-Not enough accuracy to pull off headshots, even for headshot pros. 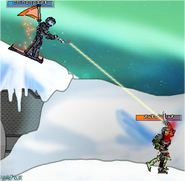 Add a photo to this gallery

Retrieved from "https://razetwo.fandom.com/wiki/Magnum?oldid=10215"
Community content is available under CC-BY-SA unless otherwise noted.