The Static Field deflects fire and sends it back at the enemy, potentially causing damage to the enemy from his own bullets. It produces a sound when activated, which elumates sound like a force field. This ability's drawback is that the user will be immobile for a set duration of time while the static field is active. Depending on how you use it, this ability can be either offensive or defensive. It can be used in times of dangers or until reinforcements arrive. Homing weapons are especially weak when against this ability because of the tendency to home back in on the user. This ability is the key to the 'Reflection' and 'Thanks' Kill Bonuses. 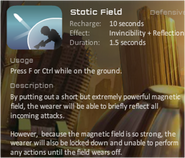