If you use a regular old M9 as a secondary fire weapon, then the Uzi should make for a good substitute. These gangster-class weapons will rip shields when up close, just try to maneuver fast to avoid getting mowed down in the process. The only real drawback with the Uzi is that it lacks any bonus abilities.

The Uzi is a small black sidearm which shoots wavy streaks in a rapid pace towards the opponent and anything in the general direction. Because of these wavy streaks, this gun is not recommended for long range, but is good for close combat, where the streaks will be more accurate. The gun dishes out small damage with each streak, but when combined with the firerate, can deal more damage than expected. Although the game describes the damage per shot as weak, the damage is actually a few times more powerful than the M9 Barret. The weapon will slice through shields and health easily.

The Uzi might seem related to the Bio Uzi of Raze 1, but only the name is the same. The real relative of the Bio Uzi is actually the Acid Hound.

The Uzi (officially cased as UZI) is a family of Israeli open bolt, blowback-operated submachine guns designed for close-range combat. They were crucial to Isreal's victory over Syrian Golan in the Six Day War. Smaller variants are considered to be machine pistols, just like the one in the game. It was invented by (then) Major Uziel Gal of the Israeli Defense Forces, and it was subsequently (against his will) named after him. 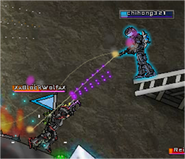 Uzi's ammo
Add a photo to this gallery

Retrieved from "https://razetwo.fandom.com/wiki/Uzi?oldid=10896"
Community content is available under CC-BY-SA unless otherwise noted.